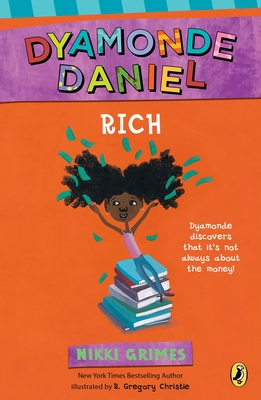 This is book number 2 in the A Dyamonde Daniel Book series.

Dyamonde Daniel is excited about the local library's poetry contest, and so is her friend Free. The prize is one hundred dollars, and just think what they could buy with that much money! But when they find out that Damaris, one of their classmates, has been living in a homeless shelter, their ideas about what it means to be rich or poor start to change.

Nikki Grimes is the award-winning, New York Times bestselling author of dozens of children's and young adult books as well as a poet and journalist. Among the many accolades she has received are the Golden Dolphin Award (2005),the NCTE Award for Excellence in Poetry for Children (2006), the Coretta Scott King Award (2003) for Bronx Masquerade, and the Horace Mann Upstanders Award (2011) for Almost Zero: A Dyamonde Daniel Book. Additionally, her book Barack Obama: Son of Promise, Child of Hope (illustrated by Bryan Collier) was a New York Times bestseller, and she was acknowledged as an NAACP Image Award Finalist in 1993 for her book Malcolm X: a Force for Change. Her books Meet Danitra Brown (illustrated by Floyd Cooper), Jazmin's Notebook, Talkin' About Bessie (illustrated by E.B. Lewis), Dark Sons, The Road to Paris, and Words with Wings were each awarded Coretta Scott King Honors. Nikki Grimes won the Laura Ingalls Wilder Award, which honors an author or illustrator whose books have made a substantial and lasting contribution to literature for children over a period of years.

R. Gregory Christie was named a top children's book illustrator by the New York Times and has received three Coretta Scott King Honors. He has illustrated numerous picture books, including The Deaf Musicians (by Pete Seeger and Paul DuBois Jacobs), which received the Schneider Family Book Award. He has illustrated the biographies of many historical and cultural figures, and he frequently lectures at schools across the country. He lives in Brooklyn, NY.
Gas-art.com

"Christie's light pen-and-ink sketches bring these good-hearted characters to life. Young readers will wish they had a friend like Dyamonde."--Kirkus Reviews

"The animated and spirited black-and-white illustrations are perfectly in tune with the story. . . Add this book to the collection and watch it always be in great demand."--Children's Literature