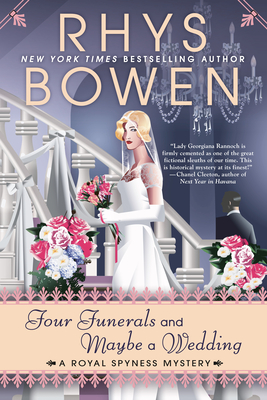 This is book number 12 in the A Royal Spyness Mystery series.

In the days leading up to her wedding to Darcy O’Mara, Lady Georgiana Rannoch takes on the responsibilities of a grand estate, but proving she can run a household just may be the death of her...

If only Darcy and I had eloped! What I thought would be a simple wedding has been transformed into a grand affair, thanks to the attendance of the queen, who has offered up the princesses as bridesmaids. Silly me! I thought that withdrawing from the royal line of succession would simplify my life. But before Darcy and I tie the knot in front of queen and country, we have to find a place to live as man and wife.

House hunting turns out to be a pretty grim affair. Just as we start to lose hope, my globe-trotting godfather offers us his fully staffed country estate. Mistress of Eynsleigh I shall be! With Darcy off in parts unknown, I head to Eynsleigh alone, only to have my hopes dashed. The grounds are in disarray, and the small staff is suspiciously incompetent. Not to mention the gas tap leak in my bedroom, which I can only imagine was an attempt on my life. Something rotten is afoot—and bringing the place up to snuff may put me six feet under before I even get a chance to walk down the aisle...

Rhys Bowen, a New York Times bestselling author, has been nominated for every major award in mystery writing, including the Edgar®, and has won many, including both the Agatha and Anthony awards. She is also the author of the Molly Murphy Mysteries, set in turn-of-the-century New York, and the Constable Evans Mysteries, set in Wales as well as two internationally bestselling stand alone novels. She was born in England and now divides her time between Northern California and Arizona.

Praise for Four Funerals and Maybe a Wedding

"Lady Georgiana Rannoch is firmly cemented as one of the great fictional sleuths of our time. This is historical mystery at its finest!"—New York Times bestselling author Chanel Cleeton

“Four Funerals and Maybe a Wedding, is certain to please new readers and long-time fans of the series alike. The road to matrimony may not run smoothly for Georgie and her darling Darcy, but readers are most definitely in for a rip-roaring good time.”—National bestselling author Anna Lee Huber

"Rhys Bowen leads us on a perilous journey fraught with twists and turns against the backdrop of the Sussex coastline. Full of fascinating characters in a compelling setting, she keeps you spellbound to the very end."—New York Times bestselling author Charles Todd

“Those who cannot get enough of royal weddings will be charmed, as will Anglophiles, and anyone who loves a solid mystery.”—Library Journal (starred review)

“Another stiff-upper-lip novel full of charm, romance, and a smidgen of mystery that's altogether delightful.”—Kirkus Reviews