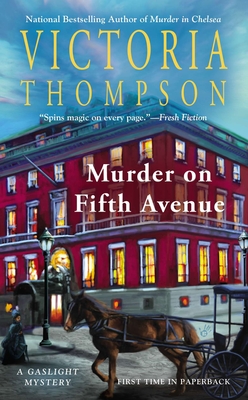 By Victoria Thompson
Email or call for price.
Special Order - Email or Call for Availability

This is book number 14 in the A Gaslight Mystery series.

From the tenements to the town houses of nineteenth-century New York, midwife Sarah Brandt and Detective Sergeant Frank Malloy never waiver in their mission to aid the innocent and apprehend the guilty. Now, the latest novel in the Edgar®-nominated Gaslight Mystery series finds Sarah and Malloy investigating the murder of a Knickerbocker club member who was made to pay his dues…

Sarah’s father, Felix Decker, takes his position in society seriously. He refuses to accept his daughter’s involvement with an Irish Catholic police detective. But when a member of his private club—the exclusive Knickerbocker—is murdered, Decker forms an uneasy alliance with Frank Malloy to solve the crime as discreetly as possible.

Malloy discovers that the deceased—Chilton Devries—was no gentleman. He’s left behind his own unofficial club of sorts, populated by everyone who despised him. As Malloy and Sarah sort through the suspects, it becomes clear to her that her father is evaluating more than the detective’s investigative abilities, and that, on a personal level, there is much more at stake for Malloy than discovering who revoked Devries’ membership—permanently.

Victoria Thompson is the Edgar® Award–nominated author of the Gaslight Mysteries including such titles as Murder on Sisters' Row, Murder on Lexington Avenue, and Murder on Bank Street, and numerous historical novels. She lives in western Pennsylvania with her family.

Praise for Murder on Fifth Avenue and the Gaslight Mystery series:

“[A] mystery with some neat twists.”—Kirkus Reviews

Sprinkled with fascinating details of turn-of-the-century New York City, Thompson's old-fashioned mystery takes the reader from the mansions of Fifth Avenue to the flophouses of the Lower East Side.  Thompson vividly re-creates the gas-lit world of old New York."--Publishers Weekly

“Victoria Thompson delivers yet another charming turn-of-the-century murder mystery...Fascinating characters with a story to tell.”—Fresh Fiction