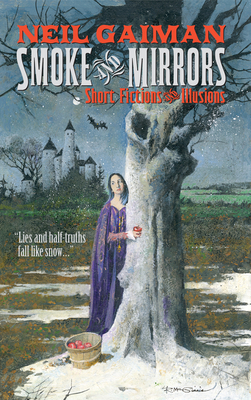 By Neil Gaiman
$7.99
OUT OF STOCK - Available To Order

An elderly widow finds the Holy Grail beneath an old fur coat in a second-hand store . . .

A stray cat fights and refights a nightly battle to protect his adoptive family from an unimagiable evil . . .

A young couple receives a wedding gift that will reveal a chilling alternate history of their marriage . . .

Beneath a bridge by the railroad tracks, a frightened little boy bargains for his life with a most persistent troll . . .

Such miraculous inventions and more await within Neil Gaiman’s first collection of short fiction, a gift of wonder and delight from one of the most unique literary artists of our day. In his capable hands, magic is no mere illusion, but a powerful means to reveal the nature of our humanity obscured in the smoke of our fears and anxieties . . . and reflected in the funhouse mirrors of our dreams.

Neil Gaiman is a #1 New York Times bestselling author of books for children and adults whose award-winning titles include Norse Mythology, American Gods, The Graveyard Book, Good Omens (with Terry Pratchett), Coraline, and The Sandman graphic novels. Neil Gaiman is a Goodwill Ambassador for UNHCR and Professor in the Arts at Bard College.

“I read [Smoke and Mirrors] while adjectives like glorious, magical and weird-but-fascinating leapt through my head, then gave up, outclassed . . . [Gaiman’s] artful ruminations stretch from dreamlike folktales to darkly futuristic science fiction . . . a fine introduction to his varied work.”
— Minneapolis Star Tribune

“Superb . . . haunting in a disturbing way and often witty and perversely humorous at the same time.”
— Richmond Times-Dispatch

“An exhilarating display of the work of one of our most entertaining storytellers.”
— Kirkus Reviews (starred)