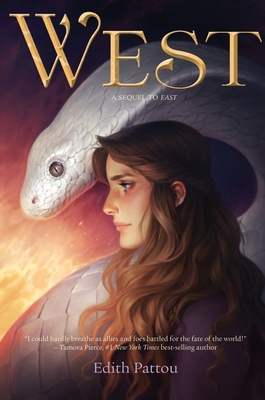 In the sequel to the beloved high fantasy East, Rose sets off on a perilous journey to find her true love when he goes missing in a thrilling tale of danger, magic, adventure, and revenge. “I could hardly breathe as they battle for the fate of the world.” —Tamora Pierce

When Rose first met Charles, he was trapped in the form of a white bear. To rescue him, Rose traveled to the land that lay east of the sun and west of the moon to defeat the evil Troll Queen. Now Rose has found her happily-ever-after with Charles—until a sudden storm destroys his ship and he is presumed dead. But Rose doesn’t believe the shipwreck was an act of nature, nor does she believe Charles is truly dead. Something much more sinister is at work. With mysterious and unstoppable forces threatening the lives of the people she loves, Rose must once again set off on a perilous journey. And this time, the fate of the entire world is at stake.

“Humans and characters from magic fight for love and life against a dreadful enemy. I could hardly breathe as they battle for the fate of the world. There isn’t a dull moment, only the risk to every life on earth!” —Tamora Pierce, #1 New York Times best-selling author

“In this luminous companion to East, Rose confronts new dangers and old enemies in a high-stakes game in which the fate of the world—and everyone she loves—hangs in the balance. If I’m ever in a life-or-death struggle against impossible odds, I want Rose by my side.” —Cinda Williams Chima, New York Times best-selling author of The Shattered Realms series

“What a worthy sequel to the amazing East! Of course Rose’s “happily ever after” would include more adventure. This journey was even more poignant, as she fully understood the stakes and the dangers this time. Once again, readers will be in awe of Rose’s courage and her devotion, and will long for her triumph in the end—even at great cost." —Margaret Peterson Haddix, New York Times best-selling author of the Shadow Children and Missing series

"A wait of longer than a decade proves completely worthwhile in the case of Pattou’s continuing spin on Norwegian myth filled with fully realized human characters and adventures both fantastic and emotionally authentic."--School Library Journal, STARRED review

"Pattou (Ghosting, 2014, etc.) builds a solid, convincing 16th-century Europe from minutely observed details...Necessary wherever the first is popular; a good addition to any collection where fairy-tale retellings circulate well."--Kirkus

"This is an exciting, layered adventure that draws from various cultural mythologies. An epic drama featuring high romance and a resourceful heroine that will appeal to fans of Pattou and new readers alike."--Booklist