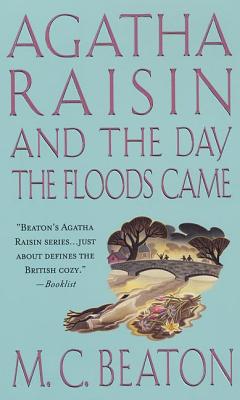 By M. C. Beaton
Email or call for price.
Out of Print - Not Available to Order

This is book number 12 in the Agatha Raisin Mysteries series.

M. C. Beaton, who was the British guest of honor at Bouchercon 2006, has been hailed as the "Queen of Crime" (The Globe and Mail). In addition to her New York Times and USA Today bestselling Agatha Raisin novels, Beaton is the author of the Hamish Macbeth series and four Edwardian mysteries. Born in Scotland, she currently divides her time between the English Cotswolds and Paris.

"The Agatha Raisin stories are always well plotted but the real attraction is the quirky characters of Agatha, Sir Charles, and James—fans will be thrilled to catch up with the titanic trio."--RT Book Reviews "Beaton's Agatha Raisin series...just about defines the British cozy."--Booklist

"A true village mystery with a heroine so timely and real, you'll want to meet her at the pub."--St. Petersburg Times

"[Agatha] is a glorious cross between Miss Marple, Auntie Mame, and Lucille Ball, with a tad of pit bull tossed in. She's wonderful."--St. Petersburg Times

"Anyone interested in a few hours' worth of intelligent, amusing reading will want to make the acquaintance of Mrs. Agatha Raisin."--Atlanta Journal Constitution

"Beaton has a winner in the irrepressible, romance-hungry Agatha."--Chicago Sun-Times

"The Raisin series brings the cozy tradition back to life. God bless the Queen!"--Tulsa World