Agatha Raisin and the Love from Hell (Mass Market Paperback) 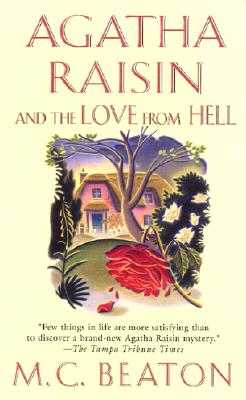 Agatha Raisin Has Finally Married The Man Of Her Dreams.
But Now Her Life Is Nothing Short Of A Nightmare...

The honeymoon is most definitely over for Agatha Raisin and her new husband, James Lacey. It's only been a short time since their wedding-and already they aren't getting on. But his wandering eye and her God-awful housekeeping are the least of their problems. Just days after a very public, very ugly marital row, James disappears-and when his mistress is later found murdered, he's the prime suspect. Agatha just doesn't buy it. Sure, he's a liar and a sneaky, low-down cheat. But a murderer? That's bloody impossible! And as some speculate on the role Agatha may have played in his vanishing, the forever-feisty Mrs. Raisin must piece together the most unsavory parts of the dead woman's past to clear James's name-and her own...

M. C. Beaton has been hailed as "the new Queen of Crime." She is "The New York Times" bestselling author of the Agatha Raisin mysteries, including "As the Pig Turns" and "Busy Body," set in the English Cotswolds, as well as the Hamish Macbeth mysteries set in Scotland. She has also written historical romance novels and an Edwardian mystery series under the name Marion Chesney. Before writing her first novels, Beaton worked as a bookseller, a newspaper reporter, a fashion critic, and a waitress in a greasy spoon. Born in Scotland, she currently divides her time between Paris and a village in the Cotswolds. She was selected the British Guest of Honor for the Bouchercon World Mystery Convention in 2006.

"Anyone interested in a few hours' worth of intelligent, amusing reading will want to make the acquaintance of Mrs. Agatha Raisin."-Atlanta Journal Constitution

"[Agatha] is a glorious cross between Miss Marple, Auntie Mame, and Lucille Ball, with a tad of pit bull tossed in. She's wonderful." -St. Petersburg Times

"Among the many joys of all Agatha Raisin adventures are Beaton's sweetly formal prose and her vivid descriptions of colorful villagers. This one, however, adds a crackerjack plot and a delightfully comic ending to the mix, making it clearly the best of the lot." -Booklist (starred review) "AGATHA RAISIN AND THE LOVE FROM HELL is sheer fun. Beaton tells a sly story as she satirizes cozy English village life. The intrepid Agatha is in fine form as she proves no one can make a monkey out of her!"-RT Book Reviews