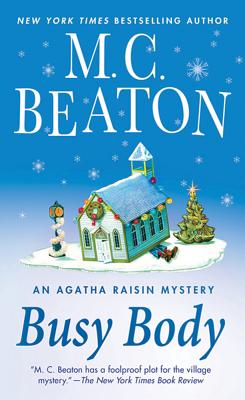 This is book number 21 in the Agatha Raisin Mysteries series.

Agatha Raisin has always been ambivalent about holiday cheer, but her cozy little village of Carsely has long prided itself on its Christmas festivities. But this year Mr. John Sunday, a self-important officer with the Health and Safety Board, has ruled that the traditional tree on top of the church is a public menace; that lampposts are unsafe for hanging illuminations; that May Dimwoody's homemade toys are dangerous for children… Things have reached such a desperate pass that the Carsely Ladies' Society joins forces with the ladies in the neighboring village of Odley Cruesis to try to put a stop to Mr. Sunday's meddling—only to find that someone has literally put a stop to him with a kitchen knife.

Agatha's detective agency is on the case, but when a man has made as many enemies as John Sunday, it's hard to know where to start…

"Beaton ... does a brilliant job of depicting Agatha's struggles with aging and keeping her detective agency afloat. Her romantic upheavals (will she ever marry close friend Sir Charles Fraith?) continue to tantalize."--Publishers Weekly (Starred Review) "Testy Agatha, continuing her habit of falling for unsuitable men, scores again with a cunning mixture of satire and mystery."--Kirkus Reviews "Beaton is a master of the cozy formula — there are plenty of red herrings, a large cast of suspects and an eagle-eye view of village life."--RT Book Reviews