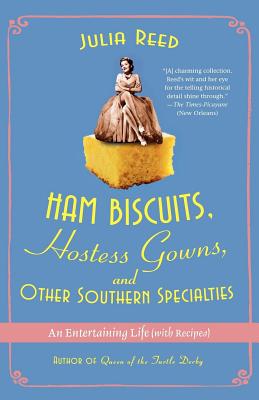 Julia Reed spends a lot of time thinking about ham biscuits. And cornbread and casseroles and the surprisingly modern ease of donning a hostess gown for one's own party. In Ham Biscuits, Hostess Gowns and Other Southern Specialties Julia Reed collects her thoughts on good cooking and the lessons of gracious entertaining that pass from one woman to another, and takes the reader on a lively and very personal tour of the culinary -- and social -- South.

In essays on everything from pork chops to the perfect picnic Julia Reed revels in the simple good qualities that make the Southern table the best possible place to pull up a chair. She expounds on:

the Southerner's relentless penchant for using gelatin
why most things taste better with homemade mayonnaise
the necessity of a holiday milk punch (and, possibly, a Santa hat)
how best to "cook for compliments" (at least one squash casserole and Lee Bailey's barbequed veal are key).

She provides recipes for some of the region's best-loved dishes (cheese straws, red velvet cake, breakfast shrimp), along with her own variations on the classics, including Fried Oysters Rockefeller Salad and Creole Crab Soup. She also elaborates on worthwhile information every hostess would do well to learn: the icebreaking qualities of a Ramos gin fizz and a hot crabmeat canapé, for example; the "wow factor" intrinsic in a platter of devilled eggs or a giant silver punchbowl filled with scoops of homemade ice cream. There is guidance on everything from the best possible way to "eat" your luck on New Year's Day to composing a menu in honor of someone you love.

Grace and hilarity under gastronomic pressure suffuse these essays, along with remembrances of her gastronomic heroes including Richard Olney, Mary Cantwell, and M.F.K. Fisher. Ham Biscuits, Hostess Gowns and Other Southern Specialties is another great book about the South from Julia Reed, a writer who makes her experiences in—and out of—the kitchen a joy to read.

JULIA REED is a contributing editor at Garden & Gun, where she writes the magazine's "The High & the Low" column. Her books include But Mama Always Puts Vodka in Her Sangria; Ham Biscuits, Hostess Gowns, and Other Southern Specialties; and Queen of the Turtle Derby and Other Southern Phenomena. Reed divides her time between New Orleans and Greenville, Mississippi.

“[A] rambunctiously charming essay collection...as refreshing and bracing as a mint julep... Even the most hopeless Yankee will have no trouble getting in touch with her inner Poultry Princess.” —Vogue on Queen of the Turtle Derby and Other Southern Phenomena

“[An] effervescent collection of essays...charming...amusing.” —The New York Times Book Review on Queen of the Turtle Derby and Other Southern Phenomena

“Julia Reed is another Southern writer with a fine hand for storytelling and cooking. Though you'll want to cook from her book, first you'll want to take it to the porch hammock to read. Each tasty tale - from her collard green chronicle to her Frozen Assets anecdote on ice cream - will whet your appetite for more.” —The Post and Courier (SC)

“[A] charming collection. Reed's wit and her eye for the telling historical detail shine through.” —The Times Picayune

“No matter what your tastes, Ham Biscuits has something to tempt your taste buds.” —The Clarion Ledger

“Not since Eudora Welty has anybody captured in such sophisticated, often mordant prose the brave, gracious, perverse, reckless, God-fearing Southern soul like Julia reed. Whether she's holding forth on fried chicken and catfish, guns, booze, cockfights, pestilence, or Southern womanhood, Reed loads both barrels and never misses the target. As a Carolina Tarheel, I rejoiced, cringed, marveled, and laughed myself sick at Reed's outrageous tales and savvy insights, and I defy anybody–Southerner and Yankee alike–to come up for are after reading the first chapter.” —James Villas, author of Between Bites and My Mother's Southern Kitchen, on Queen of the Turtle Derby and Other Southern Phenomena

“In this engaging collection of essays, Mississippi native Reed presents a fresh and eclectic portrait of the South...she renders an honest portrayal of the quirks, foibles and wonders of the region.” —Publishers Weekly on Queen of the Turtle Derby and Other Southern Phenomena