In the Ruins of Neoliberalism: The Rise of Antidemocratic Politics in the West (Wellek Library Lectures) (Paperback) 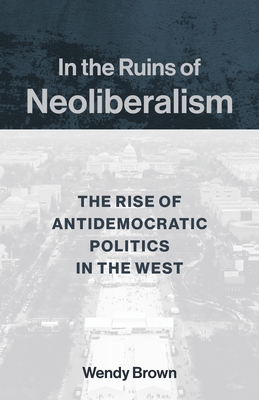 By Wendy Brown
Email or call for price.
OUT OF STOCK - Available To Order

Across the West, hard-right leaders are surging to power on platforms of ethno-economic nationalism, Christianity, and traditional family values. Is this phenomenon the end of neoliberalism or its monstrous offspring? In the Ruins of Neoliberalism casts the hard-right turn as animated by socioeconomically aggrieved white working- and middle-class populations but contoured by neoliberalism's multipronged assault on democratic values. From its inception, neoliberalism flirted with authoritarian liberalism as it warred against robust democracy. It repelled social-justice claims through appeals to market freedom and morality. It sought to de-democratize the state, economy, and society and re-secure the patriarchal family. In key works of the founding neoliberal intellectuals, Wendy Brown traces the ambition to replace democratic orders with ones disciplined by markets and traditional morality and democratic states with technocratic ones. Yet plutocracy, white supremacy, politicized mass affect, indifference to truth, and extreme social disinhibition were no part of the neoliberal vision. Brown theorizes their unintentional spurring by neoliberal reason, from its attack on the value of society and its fetish of individual freedom to its legitimation of inequality. Above all, she argues, neoliberalism's intensification of nihilism coupled with its accidental wounding of white male supremacy generates an apocalyptic populism willing to destroy the world rather than endure a future in which this supremacy disappears.

Wendy Brown is Class of 1936 First Chair at the University of California, Berkeley, where she teaches political theory. Her recent books include Undoing the Demos: Neoliberalism's Stealth Revolution (2015) and Walled States, Waning Sovereignty (2010).