When God Was A Woman (Paperback) 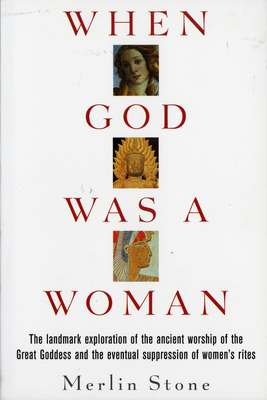 The landmark exploration of the ancient worship of the Great Goddess and the eventual supression of women's rites.

In the beginning, God was a woman...

How did the shift from matriarchy to patriarchy come about? In fascinating detail, Merlin Stone tells us the story of the Goddess who reigned supreme in the Near and Middle East. Under her reign, societal roles differed markedly from those in patriarchal Judeo-Christian cultures: women bought and sold property, traded in the marketplace, and inherited title and land from their mothers. Documenting the wholesale rewriting of myth and religious dogmas, Merlin Stone describes an ancient conspiracy in which the Goddess was reimagined as a wanton, depraved figure, a characterization confirmed and perpetuated by one of modern culture's best-known legends—that of the fall of Adam and Eve. Insightful and thought-provoking, this is essential reading for anyone interested in the origin of current gender roles and in rediscovering women's power.

Merlin Stone, a teacher of art and art history as well as a widely exhibited sculptor, became interested in archaeology and ancient religion through her art. She has produced pieces on the Goddess for both radio and the stage, and conceived and organized Goddess festivals in both New York and Toronto.