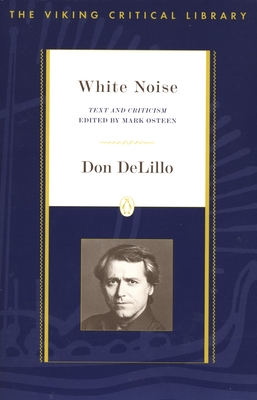 By Don DeLillo, Mark Osteen (Introduction by)
$24.00
Email or call for price.

The National Book Award-winning classic from the author of Underworld and Libra, soon to be a major motion picture starring Adam Driver and Greta Gerwig

White Noise is the story of Jack, his wife, Babette, and their four ultramodern offspring. They live in a college town where Jack is Professor of Hitler Studies (and conceals the fact that he does not speak a word of German), and Babette teaches posture and volunteers by reading tabloids to a group of elderly shut-ins. They are happy enough, until a deadly toxic accident and Babette's addiction to an experimental drug make Jake question everything.

White Noise is considered a postmodern classic and its unfolding of themes of consumerism, family and divorce, and technology as a deadly threat have attracted the attention of literary scholars since its publication. This Viking Critical Library edition, prepared by scholar Mark Osteen, is the only edition of White Noise that contains the entire text along with an extensive critical apparatus, including a critical introduction, selected essays on the author, the work, and its themes, reviews, a chronology of DeLillo's life and work, a list of discussion topics, and a selected bibliography.

Don DeLillo published his first short story when he was twenty-three years old. He has since written twelve novels, including White Noise (1985) which won the National Book Award. It was followed by Libra (1988), his novel about the assassination of President Kennedy, and by Mao II, which won the PEN/Faulkner Award for Fiction.

In 1997, he published the bestselling Underworld, and in 1999 he was awarded the Jerusalem Prize, given to a writer whose work expresses the theme of the freedom of the individual in society; he was the first American author to receive it. He is also a member of the American Academy of Arts and Letters.

Winner of the National Book Award for Fiction

“DeLillo’s eighth novel should win him wide recognition as one of the best American noveslists. . . . the homey comedy of White Noise invites us into a world we’re glad to enter. Then the sinister buzz of implication makes the book unforgettably disturbing.”
—Newsweek

“A stunning book . . . it is a novel of hairline prophecy, showing a desolate and all-too-believable future in the evidence of an all-too-recognizable present. . . . Through tenderness, wit, and a powerful irony, DeLillo has made every aspect of White Noise a moving picture of a disquiet we seem to share more and more.”
—Los Angeles Times

“White Noise captures the quality of daily existence in media-saturated, hyper-capitalistic postmodern America so precisely, you don’t know whether to laugh or whimper.”
—TIME

“DeLillo is a prodigiously gifted writer. His cool but evocative prose is witty, biting, surprising, precise . . . White Noise [is] arguably [his] best novel.”
—The Washington Post

“Its brilliance is dark and sheathed. And probing. In White Noise, Don DeLillo takes a Geiger-counter reading of the American family, and comes up with ominous clicks.”
—Vanity Fair

“A stunning performance from one of our most intelligent novelists . . . Tremendously funny.”
—The New Republic

“DeLillo’s love and flair for language unite to tell us […] something discomforting about mortality and something profound about the way we deal with it. It may be a novel superabounding with words, but none of them are wasted.”
—The Guardian