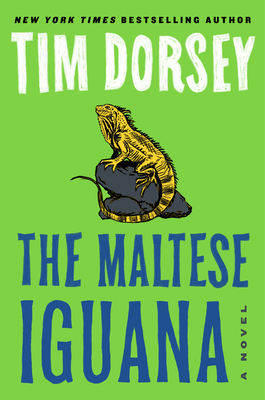 This is book number 26 in the Serge Storms series.

Serge A. Storms is back on the road in the latest zany Florida caper from the “wickedly funny” (Entertainment Weekly) Tim Dorsey.

After a long and arduous COVID-19 quarantine, Serge A. Storms is fully vaccinated and ready to hit the road. Along with his condo neighbors, he cooks up a wild plan to celebrate in true Serge fashion: each week, they rent a shuttle van and head out for funky Florida road trips and some serious revelry.

Meanwhile, a CIA revenge operation down in Honduras goes very, very wrong. The local liaison hired to help with the mission is the only witness to the disaster, and the CIA quickly sets a black ops contractor on his trail to eliminate him.

Forced to flee his home country, the witness lands in Miami with a new identity and passport. But the CIA is still on his tail, pushing him further and further south to the Florida Keys, where he runs into Serge’s convoy. With Florida’s most lovable serial killer involved, the real party is about to get started…

“Dorsey has used his novels to showcase Florida, to embrace its eccentricities, its residents’ bizarre behavior and its unusual history. Dorsey shows he loves Florida in each novel…Dorsey ladles each novel with wide swaths of humor that is more guttural yet still funny. Like [Carl] Hiaasen, Dorsey’s humor is grounded in reality…Mermaid Confidential is more Keys-centric as he adds trivia and history that is ‘so nectar-of-Florida.’” — South Florida Sun-Sentinel on Mermaid Confidential

“A wacky celebration of violence, depravity and the weirdness of Florida. Think the Three Stooges meets Ted Bundy . . . sure to appeal to readers who think that Carl Hiaasen’s slapstick noir novels are too darned subtle.”  — Associated Press on Tropic of Stupid

“A rollicking road trip we’d love to sign up for. ” — New York Times Book Review on No Sunscreen for the Dead

“With what is his best title yet, best-selling Tampa author Tim Dorsey returns with his 24th adventure…a ‘fan’-tastic, worthy addition to the pantheon.” — Florida Times-Union on Tropic of Stupid

"Bestseller Dorsey breezes through his 24th comic novel . . . mixing the slapstick humor of the Three Stooges with Sunshine State details that would make a Florida history professor envious." — Publishers Weekly on Tropic of Stupid

"This hugely entertaining series . . . [has] been one delightful adventure after another. Storms is a wonderful character, a man with a can-do attitude and, well, a unique sense of retribution. You can’t help liking the guy: he is, by all objective standards, a dangerously insane psychopath, but to Serge, it’s the rest of the world that’s crazy, while he’s merely a misunderstood crusader for law and order. A new Dorsey novel is always a cause for celebration among readers who like their heroes more than a little bent." — Booklist on Tropic of Stupid

“Dorsey’s latest in the humorous crime fiction category highlights that outrageous brand of Florida humor. With chaos always at his side, Serge A. Storms is back, and this time, he’s on a cemetery tour across the state, investigating an urban myth that just might be real and causing mayhem along the way.” — Parade on Naked Came the Florida Man?

“Upping the ante has always been the strategy for Tim Dorsey’s books, which are built on a peculiarly Floridian brand of outrageousness. So it’s no surprise that in his latest, Naked Came the Florida Man, Dorsey reaches a new high in that respect.” — Newsday

“Can it still be hurricane season? Must be, because here come Serge A. Storms and his perpetually stoned bro, Coleman, in Tim Dorsey’s gonzo crime caper Naked Came the Florida Man.” — New York Times Book Review

“A riotous retirement for Serge Storms [with] a wickedly clever yet weirdly inspiring plot.” — Tampa Bay Times on No Sunscreen for the Dead

“Dorsey’s superior 22nd crime novel [is] another successful blend of the funny and the fiendish.” — Publishers Weekly (starred review) on No Sunscreen for the Dead

“All Dorsey mayhem is vintage Dorsey mayhem, but Florida’s retirement scene provides the perfect backdrop for this latest round of lunacy.” — Kirkus Reviews on No Sunscreen for the Dead

“Dorsey’s novels are unfailingly entertaining... Serge is, hands down, the most smoothly charming, irrepressibly goofy, joyfully out-of-his-mind series lead in contemporary mystery fiction.... Don’t miss this one.” — Booklist on No Sunscreen for the Dead