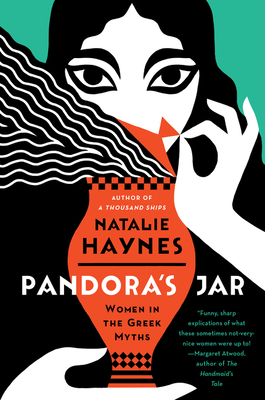 This book is SO GOOD. A must read for fans of myth retellings, especially those that put women at the forefront. Haynes, with impeccable research and a wry sense of humor, tells us that women have been at the heart of these stories from the very beginning. (Also, exactly why Theseus is the absolute worst.)

“Funny, sharp explications of what these sometimes not-very-nice women were up to, and how they sometimes made idiots of . . . but read on!”—Margaret Atwood, author of The Handmaid's Tale

The national bestselling author of A Thousand Ships returns with a fascinating, eye-opening take on the remarkable women at the heart of classical stories Greek mythology from Helen of Troy to Pandora and the Amazons to Medea.

The tellers of Greek myths—historically men—have routinely sidelined the female characters. When they do take a larger role, women are often portrayed as monstrous, vengeful or just plain evil—like Pandora, the woman of eternal scorn and damnation whose curiosity is tasked with causing all the world’s suffering and wickedness when she opened that forbidden box. But, as Natalie Haynes reveals, in ancient Greek myths there was no box. It was a jar . . . which is far more likely to tip over.

In Pandora’s Jar, the broadcaster, writer, stand-up comedian, and passionate classicist turns the tables, putting the women of the Greek myths on an equal footing with the men. With wit, humor, and savvy, Haynes revolutionizes our understanding of epic poems, stories, and plays, resurrecting them from a woman’s perspective and tracing the origins of their mythic female characters. She looks at women such as Jocasta, Oedipus’ mother-turned-lover-and-wife (turned Freudian sticking point), at once the cleverest person in the story and yet often unnoticed. She considers Helen of Troy, whose marriage to Paris “caused” the Trojan war—a somewhat uneven response to her decision to leave her husband for another man. She demonstrates how the vilified Medea was like an ancient Beyonce—getting her revenge on the man who hurt and betrayed her, if by extreme measures. And she turns her eye to Medusa, the original monstered woman, whose stare turned men to stone, but who wasn’t always a monster, and had her hair turned to snakes as punishment for being raped.

Pandora’s Jar brings nuance and care to the millennia-old myths and legends and asks the question: Why are we so quick to villainize these women in the first place—and so eager to accept the stories we’ve been told?

Natalie Haynes is the author of seven books, including A Thousand Ships, which was a national bestseller and was shortlisted for the 2020 Women’s Prize for Fiction. She has written and recorded eight series of Natalie Haynes Stands Up for the Classics for the BBC. Haynes has written for the Times, the Independent, the Guardian, and the Observer. She lives in London.

“Funny, sharp explications of what these sometimes not-very-nice women were up to, and how they sometimes made idiots of . . . but read on!”  — Margaret Atwood, author of The Handmaid's Tale

“Natalie Haynes is both a witty and an erudite guide. She wears her extensive learning lightly and deftly drags the Classics into the modern world. I loved it.”  — Kate Atkinson, author of Life After Life

“Natalie Haynes is beyond brilliant. Pandora’s Jar is a treasure box of classical delights. Never has ancient misogyny been presented with so much wit and style." — Amanda Foreman, author of The World Made by Women

“Beyoncé, Star Trek, Ray Harryhausen . . . the most enjoyable book about Greek myths you will ever read, absolutely brimming with subversive enthusiasm.” — Mark Haddon, author of The Porpoise and The Curious Incident of the Dog in the Night-Time

"Witty, erudite and subversive, this takes the women of Greek myth―the women who are sidelined, vilified, misunderstood or ignored―and puts them centre stage."  — Samantha Ellis, author of How to Be a Heroine and Take Courage

“Natalie Haynes is [Britain’s] muse.”  — Adam Rutherford, author of How to Argue with a Racist

"A hugely enjoyable and witty book, which will appeal to admirers of novels such as Madeline Miller’s Circe, Kamila Shamsie’s Home Fire, and Haynes’s own fiction.”  — The Guardian

“Impassioned and informed . . . When Haynes gets down to retelling the stories . . . and teasing out their distortions and elisions, the book flies." — Sunday Times (UK)

“An erudite, funny and sometimes angry attempt to fill in the blank spaces.”  — Observer

“Classicist Haynes challenges common ideas about Greek mythology in this sharp corrective. . . . When she hits her stride and seamlessly blends historical, textual, and artistic analysis, her survey sings. Even those casually familiar with Greek mythology will find this enriching.” — Publishers Weekly

“Agile, rich, subversive, Pandora's Jar proves that the classics are far from dead, and keep evolving with us.” — Mail on Sunday

“Packed with wry humor and scholarly insight, Pandora’s Jar shines a new light on our oldest stories, illuminating its subjects in all their painful complexity.” — Booklist

"Throughout, Haynes also notes that these often outlandish retellings and related tropes have become (flawed) inspirations for works of modern art, music, and film, including the original Star Trek series, an episode of The Simpsons, Pulp Fiction, and a music video by Beyoncé . . . Readers of all levels of knowledge are certain to be enthralled with her analysis and find her humor and wit captivating. A fun and informative addition to the ongoing consideration of ancient mythology." — Kirkus Reviews

"A classicist revisits the tales of 10 mythological women from a female perspective, adding a new depth and nuance to the stories of Helen of Troy, Medea, Medusa and others." — New York Times