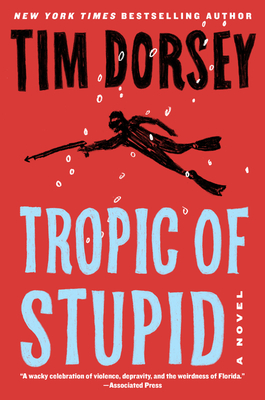 This is book number 24 in the Serge Storms series.

Serge A. Storms embarks on a tour to meet his long-lost relatives in this madcap entry in the bestselling series from Florida’s “compulsively irreverent and shockingly funny” (Boston Globe) Tim Dorsey.

Devoted Floridaphile Serge Storms is a lover of history, so he’s decided to investigate his own using one of those DNA services from late-night TV. Excited to construct a family tree, he and his sidekick Coleman hit the road to meet his kin. Along the way, he plans to introduce Coleman to the Sunshine State’s beautiful parks where he can brush up on his flora, fauna, and wildlife, and more importantly, collect the missing stamps for his park passport book.

But as the old saying goes, the apple doesn’t fall far . . .  Serge is thrilled to discover he may be related to a notorious serial killer who’s terrorized the state for twenty years and never been caught. Which one of his newfound relatives will be the one to help him hunt down this deranged maniac? Serge doesn’t know that a dogged investigator from the Florida Department of Law Enforcement is also hot on the trail.

Then Serge meets a park ranger who’s also longing to make a family re-connection. But all is not as it appears on the surface, and Serge’s newfound friendship in the mysterious swamps of Florida may lead to deadly results.

Finding his own relatives has made Serge understand the importance of family. Of course he’ll do anything to help . . .

“With what is his best title yet, best-selling Tampa author Tim Dorsey returns with his 24th adventure…a ‘fan’-tastic, worthy addition to the pantheon.” — Florida Times-Union on Tropic of Stupid

“A wacky celebration of violence, depravity and the weirdness of Florida. Think the Three Stooges meets Ted Bundy . . . sure to appeal to readers who think that Carl Hiaasen’s slapstick noir novels are too darned subtle.”  — Associated Press on Tropic of Stupid

"This hugely entertaining series . . . [has] been one delightful adventure after another. Storms is a wonderful character, a man with a can-do attitude and, well, a unique sense of retribution. You can’t help liking the guy: he is, by all objective standards, a dangerously insane psychopath, but to Serge, it’s the rest of the world that’s crazy, while he’s merely a misunderstood crusader for law and order. A new Dorsey novel is always a cause for celebration among readers who like their heroes more than a little bent." — Booklist on Tropic of Stupid

"Bestseller Dorsey breezes through his 24th comic novel . . . mixing the slapstick humor of the Three Stooges with Sunshine State details that would make a Florida history professor envious." — Publishers Weekly on Tropic of Stupid

"This is one of the best series of books out there . . . There may not be a better bromance team than Serge and his bestie Coleman. Tim Dorsey nails it every time with his pop culture and local south Florida refrences and his many LOL moments. . . .  It’s another fun ride around South Florida, with many interesting characters and Serge using his smarts to outwit the bad guys." — Red Carpet Crash on Tropic of Stupid

"Dorsey’s latest in the humorous crime fiction category highlights that outrageous brand of Florida humor. With chaos always at his side, Serge A. Storms is back, and this time, he’s on a cemetery tour across the state, investigating an urban myth that just might be real and causing mayhem along the way."
— Parade

"Upping the ante has always been the strategy for Tim Dorsey's books, which are built on a peculiarly Floridian brand of outrageousness. So it's no surprise that in his latest, Naked Came the Florida Man, Dorsey reaches a new high in that respect."
— Newsday

"Readers with an appetite for gallows humor will be sated." — Publishers Weekly (starred review)