The Pope of Palm Beach: A Novel (Serge Storms #21) (Paperback) 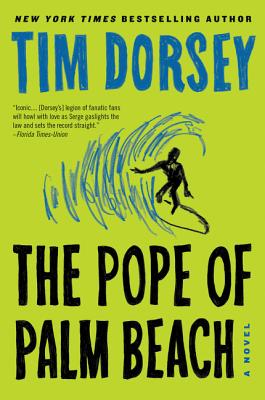 By Tim Dorsey
Email or call for price.
Special Order - Email or Call for Availability

This is book number 21 in the Serge Storms series.

No one worships the Sunshine State as much as Serge A. Storms. Perpetually hunting Floridian arcana and lore, he and his permanently baked sidekick, Coleman, are on the road again. This time they’re on a frenzied literary pilgrimage that leads them back to Riviera Beach, the cozy seaside town where the boys spent their formative years.

Growing up, Serge was enthralled by the Legend of Riviera Beach, aka Darby, a welder at the port who surfed the local waves long before the hot spots were hot. A god on the water, the big-hearted surfer was a friend to everyone—the younger surfers, cops, politicians, wealthy businessmen and ordinary Joes—a generosity of spirit that earned him the admiration of all. Meanwhile, there was a much murkier legend that made the rounds of the schoolyards from Serge’s youth—that of the crazy hermit living in a makeshift jungle compound farther up the mysterious Loxahatchee River than anyone dared to venture.

Now he’s back, with those legends looming larger than ever in the rearview mirror of his memory. As his literary odyssey moves north from Key West, closer and closer to his old stomping grounds, Serge digs into the past as only Serge can. Along the way, he unintentionally disturbs some long-forgotten ground, attracting the attention of a cast of villains that only Florida can produce.

Told in alternating flashbacks between Serge and Coleman’s childhoods and the present day, The Pope of Palm Beach is a witty and deliciously violent delight from the twisted imagination of Tim Dorsey.

“You gotta love an author who knows how to deliver humor and wit along with a riveting mystery that keeps you from putting the book down until the very end. An author who has never let the book lover down.”
— Suspense Magazine

“Dorsey’s satiric skewering spares nothing and no one in this riotous farce that’s almost too much fun to call reading.”
— Providence Journal

“[Serge and Coleman’s] wildest and funniest ride yet, resulting in plenty of sex, drugs, violence, and lottery winnings.”
— PopMatters.com

“Iconic.... [Dorsey’s] legion of fanatic fans will howl with love as Serge gaslights the law and sets the record straight.”
— Florida Times-Union

“…fans of wacky crime fiction will have plenty of fun.”
— Publishers Weekly

“If you’re looking to shake off the winter doldrums with a solid, laugh-a-page read with some innovative mayhem applied to deserving parties, this is the novel you want and need.”
— 20somethingreads.com