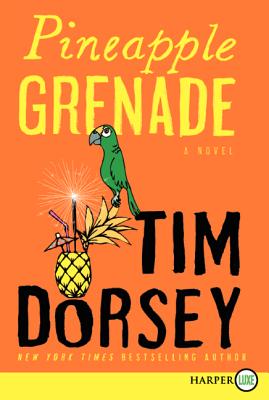 This is book number 15 in the Serge Storms series.

“The undisputed king of the comic crime novel.”
—Providence Journal

“I guarantee Dorsey will never win the Nobel Prize for Literature—he’s far too funny.”
—Richmond Times-Dispatch

Gloriously unrepentant Florida serial killer Serge Storms is back—and he’s finagled his way into becoming a secret agent in Miami—in another outrageous crime comedy from New York Times bestselling author, Tim Dorsey. In Pineapple Grenade, the incomparable Serge takes up spying for the president of a banana republic, and now Homeland Security wants to bring him down. It’s always a wild ride when Dorsey’s at the wheel, and with Pineapple Grenade he delivers his most explosively hilarious road trip to date.

“Pineapple Grenade is a topsy-turvy, slap-happy romp through Florida.” — Sun-Sentinel

“Pineapple Grenade displays Dorsey’s talents as a comedian, a Florida historian, a political and social commentator, and a well-seasoned writer.” — Gainesville Times

“A “guy” book, a real “man’s man” kind of novel. But kind of fun for the ladies to enjoy as well - they kind of give women an insight into the weird, wonderful way a man’s mind works when the boys are let loose with their toys.” — Ventura County Star

“Bestseller Dorsey dishes up his Miami mayhem with a side order of mordant wit … neither Dorsey’s fast-paced prose nor his delight in skewering human foolishness has lost its mischievous sparkle.” — Publishers Weekly

“Up a notch … Dorsey’s 15th pits Serge against what may be the only folks as dysfunctional as he is: members of the international intelligence community.” — Kirkus Reviews

“Bestseller Dorsey dishes up his Miami mayhem with a side order of mordant wit … neither Dorsey’s fast-paced prose nor his delight in skewering human foolishness has lost its mischievous sparkle.” — Go386.com

“A rollicking ride” — All Good Things and More