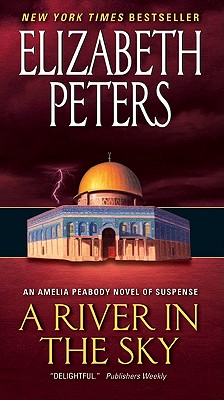 By Elizabeth Peters
$9.99
Email or call for price.

This is book number 19 in the Amelia Peabody Series series.

Intrepid archaeologist and superior sleuth Amelia Peabody returns in A River in the Sky. In this breathtaking new adventure, New York Times bestselling Grand Master Elizabeth Peters transports the indomitable Amelia and her family, the Emersons, from their usual milieu, early twentieth-century Egypt, to an exciting—and dangerous—new locale: Palestine! A tale full of atmosphere, intrigue, and thrills, A River in the Sky is further proof that “Peters has few rivals” (Houston Chronicle).

Elizabeth Peters earned her Ph.D. in Egyptology from the University of Chicago’s famed Oriental Institute. During her fifty-year career, she wrote more than seventy novels and three nonfiction books on Egypt. She received numerous writing awards and, in 2012, was given the first Amelia Peabody Award, created in her honor. She died in 2013, leaving a partially completed manuscript of The Painted Queen.